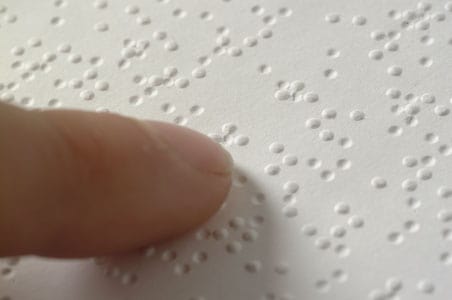 Every once in awhile, someone says something so profound, it becomes a moment worth repeating over and over again.

Singer-songwriter Stevie Wonder presented at the 2016 Grammy awards.  Since he is blind, he did not have the benefit of using a teleprompter when revealing the Song of the Year.  Instead, he read the name of the winner off of a card written in braille.   After opening the envelope, he joked about the audience not being able to read the card because they cannot read braille. He then made this remark before announcing the Song of the Year:

“I just want to say, before saying the winner, that we need to make every single thing accessible to every single person with a disability.”

Celebrities have much influence on popular opinion and their viewpoints have the potential to become movements.  Accessibility Services, Inc. wants to thank Mr. Wonder for standing up and speaking out on behalf of everyone who has a disability. His strength and perseverance to overcome his own disability helped him climb to the top of the music charts and become one of the most influential legends of our lifetime.

The most rewarding part of our job here at ASI is seeing the independence both our clients and caregivers experience when we install their environmental control unit (ECU). Watching a individual with quadriplegia control his television, seeing someone with end stage ALS being able to communicate with their loved ones and witnessing a person with multiple sclerosis turn on their bedroom light for the first time in a long time is why we do what we do. Assistive technology has advanced significantly during the more than two decades we have been in business. ASI is proud to have played such a significant role is striving toward making, “every single thing accessible to every single person with a disability.”

Once again, thank you, Mr. Wonder. Your statement truly says it all!

The autonoME in Action