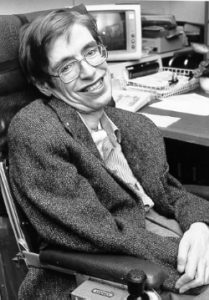 The world recently lost a great physicist, cosmologist and author. Stephen Hawking’s scientific work and theories will live on forever, as will his brave fight with amyotrophic lateral sclerosis (ALS), which he was diagnosed with at age 21. Hawking never let his diagnosis hold him back from having a family and successful career. One of the most recognized scientists of our generation also became one of the most recognized individual with quadriplegias. Hawking was able to excel despite his disability thanks to advances in assistive technology for individual with quadriplegias. He had a speech generating device which allowed him to communicate via alternative augmentative communication (AAC). It has been widely reported Hawking’s response to the speech generating device/AAC was, “I can communicate better now than before I lost my voice!”

Stephen Hawking showed us all that nothing is impossible. He also demonstrated how individual with quadriplegias can not only lead independent lives with assistive technology but can literally reach for the stars and beyond.

Jobs for Individual with Quadriplegias – Software Developer Scroll to top