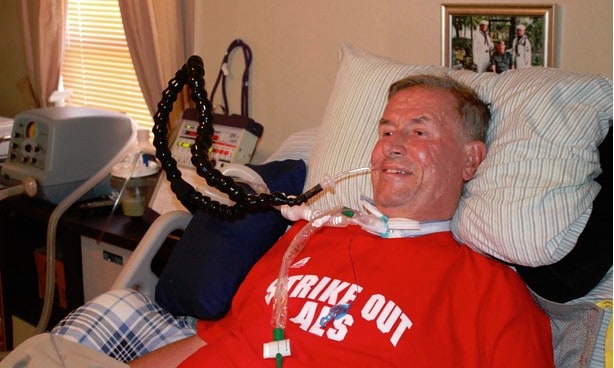 Michael Kelly Controls His Entire Environment with the Help of the AutonoME ECU, Equipped with Both Sip and Puff and Eyegaze Technology.

(Spring Hill, FL) – U.S. Army veteran Michael Kelly proudly served in Vietnam. During his tour, he experienced the conflicts and hostilities of war. However, his true battles were yet to come.

Kelly was diagnosed five years ago with Amyotrophic Lateral Sclerosis (ALS), also known as Lou Gehrig’s disease. Because of his military service, Kelly qualifies for assistance from the Veteran’s Administration (VA). Kelly’s debilitating condition has slowly taken away his independence, so the James A. Haley Veterans’ Hospital in Tampa, Florida purchased an Environmental Control Unit (ECU) for him. The results have been nothing less than inspiring.

According to his daughter, Erin Shutt, “Communicating was becoming extremely difficult for him, even simple tasks such as changing a channel or making a phone call. The eye gaze computer has given my father back some of this independence. He can now change the channel on his TV, control positions in his bed, make phone calls and has even started using Facebook and the Internet to communicate with family and friends.”

Accessibility Services, Inc. (ASI) in Homosassa, Florida produces the autonoME ECU. The company customizes the devices to fit the specific needs of each client. In Kelly’s case, the unit was equipped with both Sip and Puff and Eyegaze technology. While in bed, Kelly prefers to operate the autonoME through his sip and puff switch. When on the go, he transfers the autonoME to his wheelchair and controls it via an Eyegaze Camera.

“Diseases such as ALS never affect two people in the same way,” explains Brice Green, Product Manager for ASI. “We customize the units to fit each client’s circumstance. In the case of Michael Kelly, both Eyegaze and Sip and Puff technology were instrumental in providing maximum independence.”

“There is nothing more rewarding than having an opportunity to offer someone their independence back,” says Green. “As long as we can continue to make an impact on the lives of our clients and their families, we will keep serving this often underserved and overlooked population.”

“This has not only made my dad’s life a little easier but it has also taken some burden off of his caregivers because he doesn’t have to be so dependent on us,” concludes Shutt. “The autonoME is a blessing for all of us.”

About Accessibility Services, Inc.
Accessibility Services, Inc. (ASI) is a leading provider of environmental control units (ECU’s) designed specifically for individuals with severe disabilities and spinal cord injuries. Founded in 1989 with a primary vision to help veterans, the company has since expanded its mission to address the needs of all severely disabled individuals with a special focus on the unique and exceptional needs of the individual with quadriplegia community. ASI designs, customizes, installs and services ECU’s which enable clients to control their entire surroundings and environment, thus significantly increasing independence and improving independence. ASI’s proprietary autonoME unit has become one of the most popular hospital and residential devices on the market. Founder Fred Thompson’s philosophy, “we start with the customer and work backwards” has inspired ASI’s research and development engineers to stay one step ahead of technology, ensuring the company delivers the most advanced and progressive ECU solutions available. For more information, visit https://accessibilityservices.com.

A Story of Inspiration…