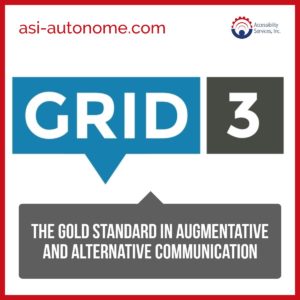 No two spinal cord injuries or diseases are alike.  One quadriplegic paralyzed from a car accident can be left with completely different abilities than another. A person with a debilitating disease such as ALS or MS may lose certain abilities as their disease progresses.  Switch scanning is so important because it allows the user to customize how they control their environmental control unit (ECU) /speech generating device (SGD).  The autonoME – powered by Grid 3 software – has two switch input ports, allowing individuals to customize how they control the tablet.  Users can choose from a number of switch options, which vary by sensitivity, size and type of body movement. A few popular input method options for AAC include:

Switch scanning is easy to set up.  The tablet is simply placed in the position desired by the user and the switch is plugged into one of the two input ports.

When it comes to scanning, the autonoME powered by Grid 3 software allows for a variety of options, including row column scanning and two-way elimination. Speed can be easily be increased or decreased.  Cancel, reverse, and pre-programmed words are also possible.  And, the autonoME’s multiple switch ports allow the user to better customize scanning.

Contact ASI today for a complimentary consultation to learn more about the autonoME and its switch scanning options.